Back from our holiday - visiting museums, what else ;-) - I started sorting through more than 600 photos...
Here is something from the Domschatzmuseum in Regensburg for all who are interested in brocaded tabletweaving: 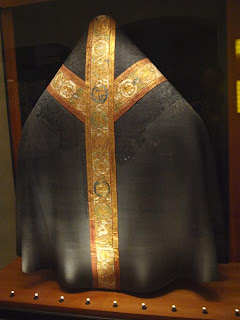 So called "Wolfgangskasel" (chasuble of St. Wolfgang), dating around 1050.
Patterned silk fabric with embroidery and brocaded tabletwoven bands, "reconstructed" in the 15th century when they used some new silk fabric to fill all the holes in the original garment. Today only little of both fabrics is left, most of the darkgrey fabric is from the latest restoration...

Taking pictures without flashlight was allowed, so thanks to the museum for that!!!

The tabletwoven borders are really georgious, they have a repeating design of birds and lions between flowershaped things and little spacing patterns. The warps is red and almost-black silk, woven in 3:1 broken twill. The dark threads form part of the pattern together with the red that are also the binding threads for the brocading. 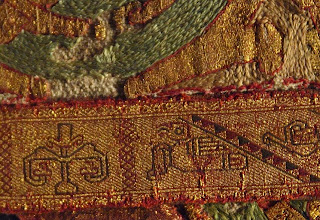 The central pattern is bordered by a small row of patterns on each side - they are rather worn, so in most parts of the bands you can not really see them any more.

Here you can also see part of the embroidery done in gold and silk and the linen background.


Luckily for us today the lowest part of the chasuble is quite worn over all, so the gold has almost completely rubbed off from the tablet weaving and you can see whats under the brocading :-)

Here you can clearly see the dark warp threads forming the pattern on a red background.
If you think you now these cute little lions from somewhere - I think they are in Collingwoods book in the chapter about 3:1 broken twill. I'm not really sure for I don't have my book here at the moment.

Nancy Spies mentions this garment and its borders in "Ecclesiastical pomp..."  on page118, 120 and 121. In her list of surviving brocaded bands it's called "Band on the chasuble attributed to St. Wolfgang, bishop of Regensburg 11th/13th century"
Unfortunately she states that the original is in Vienna, so don't be confused if you don't find it imidiately looking for a band from Regensburg as I did...
A big "Thank you!" to aislingde for pointing me in the right direction!!!
Posted by Chris at 10:02 PM 7 comments: 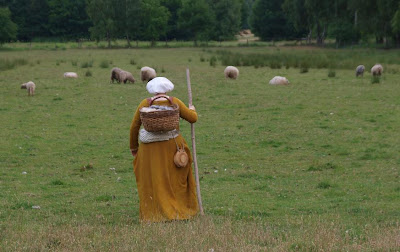 We used one of the last evenings before shearing to take some late 15th century shepherding photos with all the sheep still in their full "garb". The day after tomorrow they will all look kind of sheepish with their fleeces gone ;-)
After collecting period ilustrations with women as shepherds (anybody who read "The wee free men" will know why I don't use "shepherdess"!) for a while, I thought it was high time to take pictures with my flock before going to an open air museum to "play" with the local sheep. After all, my woolly friends would be really upset with me, if I would only use foreign sheep as models ;-)
So here they are in their full decorative woolliness: 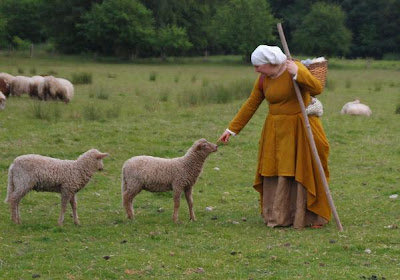 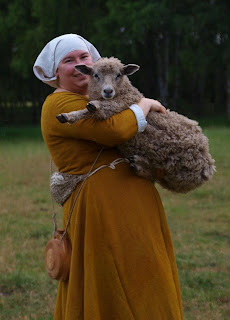 Gabrielle, the cuddliest of this years lambs. When she was born, she was so small we really feared she would not make it. But with a very strong will to survive and a charming personality she grew from a strange looking alien into a cute little sheep :-) 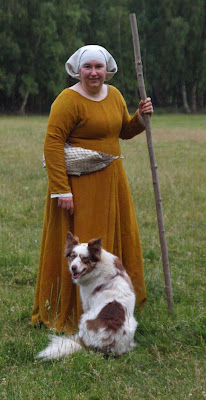 Glynn, the sheepdog of my friend Birgit also agreed to pose with me :
She's a real help when we have to herd in the sheep for health checks etc. They are very nice and come to us when we call them to get treats like dry bread - but they just know when we plan "something nasty" like controlling their feet or deworming...
Then Glynn saves the day with her fast paws and sheepsense.


And last, but really not least, another cuddly sheep: Dietrich von Bern. He's one of my rams (actually, not really mine...) and a big softie. He loves getting human attention - others leave, when all the bread has been munched, Dietrich stays and wants to be stroked. Walliser Schwarznasen (Blacknose sheep from swiss region Wallis) are generally very friendly, but I think he's something special. According to breeding standarts his big black spot on the left shoulder is not allowed, so he was originally due to meeting the butcher...

But I was looking for a Walliser Schwarznasen ram as a present for my friend at the same time and so Birgit brought us together. Since then Dietrich is one of my favorites -  and he really was a success as a present, you should see Dietrich and Andi together!

Well, I think you really should, so I'll show you two more photos instead of one: 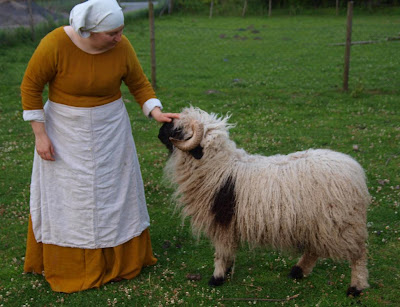 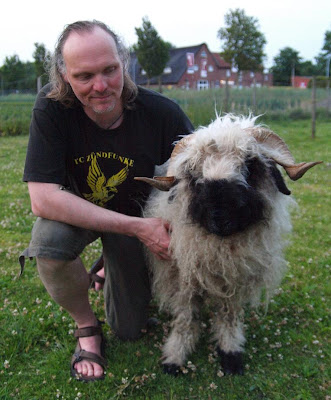