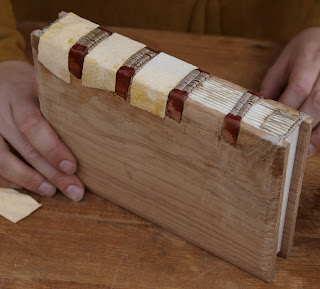 For some time yet I've been working on a small codex - a book with wooden boards. It's going to be a notebook for a medieval craftsman, so the book is rather small and simple.
After folding the handmade paper and gathering it into quires / sections, I took strips of rather sturdy leather to sew them onto. These bands have a slit, so the thread goes from the quire up through the slit, around the band and down through the slit into the quire again.
This makes a distinctive sewing pattern typical for the late medieval codex. After sewing all the quires to the bands, I made boards. The boards are ash wood, because it is is hard, tough and does not work a lot once it is dry. It was not as common for boards as oak or beech, but because of it's fast growth it may have been a cheaper alternative... The boards have grooves for the bands made with a chisel and I smoothed the surface and thinned their edges using a handplane.
Attaching the bands to the boards is done here in a rather simple way - they are glued into grooves. There are other ways, but for a small book this method was used as some originals show. After the glue has dryed, the bands are cut with a paring knife so nothing will be visible once the leather cover is attached.
The cords of the headbands are also glued to the boards and strips of chamois stuck unto the spine between the bands to make a smooth surface.
To be continued...
Posted by Chris at 3:37 PM 2 comments: 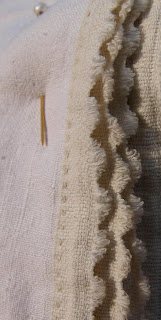 As promised, here are some more detailed photos of the border of my "Kruseler".
You can see the plain weave in tabby with a double thread weft in the left part of the border and the protruding weft loops in the right part.
I simply attached it to the selvedge of a rectangular linnen veil :-)
On the next photo you can see the border going round the corner - from the original paintings of Conrad von Soest I got the impression the women are wearing headscarfs with 4 sides of frill...


The advantage is that I can wear the veil in at least two different ways now: I can either fold it twice and pin it to my braids or fillet as shown here or I can wear it unfolded, draped around head and neck like in the last photo. 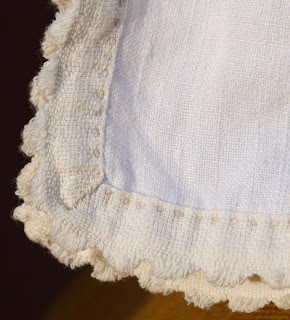 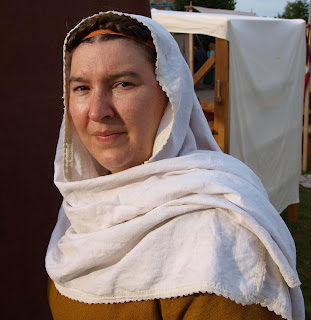