So much has happened since my last post that I'm not even going to try to list it all up...

BUT...there are some things that I'd like to show you ;-) 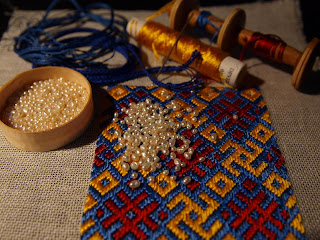 First of all, I spend a lot of time at home about a year ago (called being ill) and got into embroidery. Something that never really interested me before, at least not doing it myself.

But I needed something to relax my brain, and brick stitch embroidery is perfect for that. Hours and hours of doing nothing more complicated than counting to 6 ;-)

After doing a little testpiece with yarn I had in stash, I ordered some really nice silkyarn from Devere Yarns and started designing a pattern while waiting for the yarn to arrive. I didn't want to use one of the patterns that you can already see in a lot of versions on the internet, so I designed my own pattern from bits and pieces I had seen on an embroidered linnen (table?) cloth from Lübecks Marienkirche from the second half of the 14th century. 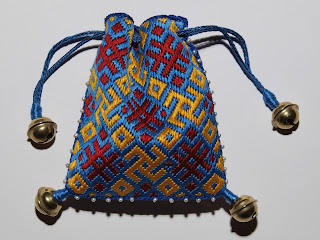 Just when I had finished drawing my pattern, the yarn arrived :-) I started on the embroidery and within a few weeks was done with it. Meanwhile I had found some nice little details I wanted to add while turning the embroidery into a small relic pouch: The seams are covered with freshwater pearls stiched on to looped silk braids just like on a small embroidered pouch once belonging to Hermann von Goch. And because I liked the little bells on Hermann's pouch so much, I had to add bells to my pouch, too ;-)


I gave the pouch to my husband (yes, I got married some time ago...) as a christmas present  and instantly started on a second one, this time to go with my new 1400 dress. But that's another story..