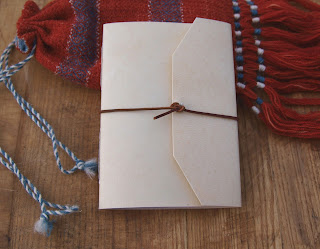 For my friends birthday last week I wanted to make something unique - so I did :-)
As I know of his fascination of the socalled Dance of Death (Totentanz in german) motif, I was looking for a faksimile of one of the early printed versions from the 15th century, but found none...
But thanks to a german library I got some scanned images in good quality of the Dance of Death from the "Heidelberger Bilderkatechismus" (illustrated catechism from Heidelberg), printed between 1455 and 1458. So all I had to do was print them on handmade paper and make a small book out of it... 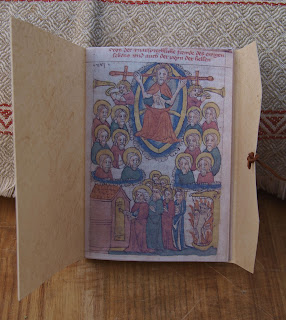 Here is the result:
As there are only 28 pages in the book, it was too small to bind it as a codex (binding with more than one quire and wooden boards). So I used a sheet of sturdy parchment and made a kopert out of it. The 7 leafs of paper are gathered in one quire and sewn through the parchment cover with a waxed linnen thread. The flap closure of the kopert is simply closed with a fine leather thong, wound around the book. A simple, flexible but rather sturdy binding for such a small book: It's only 10cm high!
On the first page is an illustration from the Bilderkatechismus that is not really a part of the Totentanz, but I thought it made a good frontispiz... It is titled "von der unausprechliche freyde des ewigen lebens und auch der peyn der hellen" (of the unmentionable joy of eternal life and also the pain of the hells) and shows a really comic-like depiction of hell in the lower right corner: Some monsters mouth full of flames with two people and a devil inside, all grinning sheepishly. 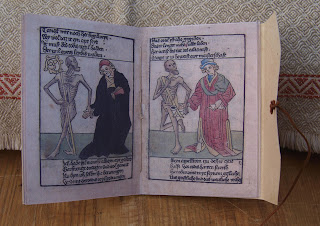 Then there is one page with a short text about how inevitable death is for everybody, regardless of wealth or social status. And then the dance begins... On 25 pages Death in the form of a skeleton / decaying corpse is shown dancing with people, from emperor to little child and everyone in between. Here you see him with an abbot on the left and a jurist on the right. Death takes them by the hand and adresses them in a short speach, printed above the illustration. The answer of the person is always below. Here, as an example, is what Death says to the jurist: "Das ortil yst alzo gegeben, Das ir lenger nicht sullet leben. Her jurist das tut des tod sanft, Mogit ir zo beweisest ewr meisterschaft." And the jurist answers: "Keyn appelliren zu dezir zeit, Hilft des todis harten streyth. Her obirwint myt seynem geflecht, Das geistliche und das weltliche recht."
Posted by Chris at 1:41 PM